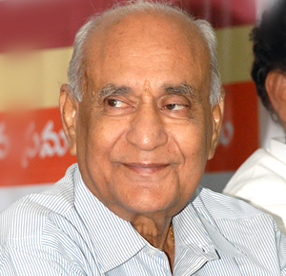 It gives me great pleasure that our Bank has started its own website. I am sure, this website is definitely going to be an important milestone in the history of our bank. This year we are celebrating our 100th year of establishment and it is but apt coincidence that we have started our own Website for better service of our customers. I commend the work of all those who actively participated in the design and launching of the Website and wish that every customer makes full utilization of the services provided through it.

Sri.Manam Anjaneyulu, a journalist, Trade Union Leader, particularly of un organized masses and above all a hard core communist, has taken the reins of administration of Visakhapatnam Co-operative Bank on 29/06/1983.He became a guiding force in developing the Bank from Rs.69,19,000/- deposit base in 1983 to Rs.2119 crores by the end of the year 2014, by virtue of his hard work, vision and leadership. His indomitable spirit made the Visakhapatnam Co-operative Bank Ltd., stand up like a giant in the Urban Banking Sector in the state of Andhra Pradesh expanding a unit bank to 35 branches in a span of 30 years of his chairmanship.

He was Director and Vice-President of NAFCUB representing Co-operative Banks at National Level and the latest assignment as Director representing state level organizations. He was in the panel for several committees empanelled by Government including the Experts Committee and TAFCUB in the state of Andhra Pradesh and Member to Advisory Committee, Institute of Co-operative Management, Hyderabad. He authored several articles on different occasions and contributed to different vernacular dailies and magazines. He was a member of 10th A.P State Legislative Assembly. He was uninterruptedly chairman of the Bank ever since he was elected in 1983 to till he had handed over the responsibilities to Sri.CH.Raghavendra Rao and now gracing the institution with his presence as Emeritus Chairman with love, affection, confidence reposed by 52,000 Share Holders in the State of Andhra Pradesh & Telangana. He is admired as an icon of cooperative movement.

Sri. Chalasani Raghavendra Rao, born on 16.11.1955 to Sri. Chalasani Jagannadha Rao and Smt. Chalasani Jayaprada in an agriculturist family with rural backdrop at Annavaram Village, Nuziveedu Mandal and excelled as Chairman of The Visakhapatnam Co-operative Bank ltd., with his commendable leadership qualities and astute approach. He served and voluntarily retired from Hindustan Zinc Ltd in 2001. He was elected as Director of The Visakhapatnam Coop Bank in 1993. Even as an employee of the Zinc, he took active part in organizing and leading the employees of The Hindustan Zinc Ltd., as a Trade Union Leader for achieving social justice to all employees. He has organized and led many associations in the unorganized sector also and served as District Secretary in the AITUC, Visakhapatnam.

The success of a man is to be gauged not purely from his wealth/ prosperity or economic standing but also on what he gave back to the society. Sri. Raghavendra Rao has made significant contribution to the society by giving a befitting fight to set the lives of the downtrodden.

Though his role as a Director in the Bank is quite different from his earlier role as a Trade Union leader, he accepted this challenge and proved equally good. Being a highly energetic and dynamic leader, he worked as ‘right hand’ to Sri Manam Anjaneyulu garu in understanding and handling different issues faced by the Bank. At times when the Chairman was otherwise busy, he undertook the task of liaisoning with the stake holders and also with RBI, Cooperative Ministry and Cooperative Department. His meritorious service was recognized by the bank and share holders by elevating him to the position of Executive Director in 2010 as a part of succession planning and thereafter Chairman of the Bank succeeding Sri Manam Anjaneyulu garu in 2013. His vibrant and exuberant qualities became manifest as soon as he took charge as the Chairman of the bank.

In the early stage of his Chairmanship Sri. Raghavendra Rao took it upon himself to spearhead a total transformation of the bank with introducing Core Bank Solutions, shifting Bank’s Head Office to new ambience & modern premises in the heart of the city, a own website for the Bank is developed and launched. The centenary year celebrations of the Bank were inaugurated amid pomp and show and an attempt to make one and all involve in sharing this momentous occasion is created. 8 new branches to be opened in 2016 making the total toll of branches to 43 and one of Sri. Raghavendra Rao’s most outstanding contributions to the bank’s economy has been his historic pioneering role in creating world-class infrastructure to attract future generations and also to facilitate them with latest technologies out of which introducing bank ATMs is one of greatest leap in the bank’s 100 years history.

Sri. Raghavendra Rao has been staunch follower and spearheading the process initiated by his visionary predecessor Sri Manam Anjaneyulu garu for transforming the Visakhapatnam Cooperative Bank Ltd from a local bank to be one of the top 20 urban cooperative banks in India today. Under his leadership which started just two years back the bank’s business have grown significantly. Today the bank has emerged as first among more than 1579 Urban Banks functioning in entire India except Gujarat and Maharashtra states.